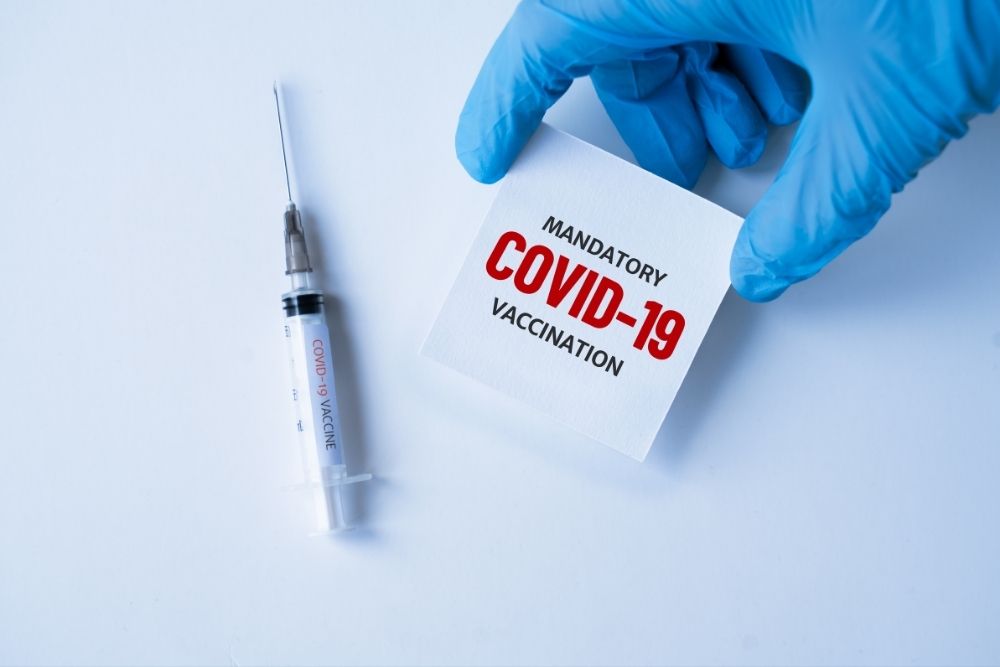 On Friday 3 December 2021 the Fair Work Commission (‘FWC’) handed down an important decision concerning the ability of employers to introduce mandatory vaccination policies for employees.

In summary, the FWC’s comments support the view that it is possible for employers to mandate vaccines on health and safety grounds but confirm that if an employer does not adequately consult employees before doing so, then this is likely to render such a policy unlawful.

What was the Case About?

The case concerned an application by the CFMMEU (‘the Union’) to deal with a dispute in respect of a mine operated by BHP, and BHP’s decision to introduce a vaccination policy that prohibited access to the mine unless employees had been vaccinated for COVID-19. The employees were all covered by the Mt Arthur Coal Enterprise Agreement 2019 (‘the Enterprise Agreement’).

The FWC was called upon to determine whether the direction to be vaccinated was a lawful and reasonable direction.

The FWC’s Position on COVID-19

Helpfully, the FWC listed a number of “general factual propositions” which it stated were “uncontentious” regarding COVID-19 (based on the evidence that was before it), namely:

1. COVID-19 involves a high burden of disease, greater than influenza.

2. Any infected person is at risk of developing serious illness from the virus, which may lead to death.

3. The risks posed by COVID-19 have changed with the rapid rise of the Delta variant which is more infectious and has more severe health effects than previous variants.

4. All COVID-19 vaccines currently available in Australia are effective at preventing symptomatic infection, including from the Delta variant.

5. All COVID-19 vaccines currently available in Australia substantially reduce the risk of serious illness or death, including from the Delta variant.

6. All COVID-19 vaccines currently available in Australia are safe and any adverse effects are usually mild. There is a much higher risk of developing serious complications and dying from acquiring COVID-19.

8. While other measures, such as mask-wearing, and social distancing, are demonstrated to reduce the transmission of COVID-19, the effectiveness of these measures depends on people applying them consistently or correctly. They do not provide a substitute for the constant protection offered by vaccines, nor do they reduce the risk of developing serious illness once somebody acquires an infection.

9. Vaccination is the most effective and efficient control available to combat the risks posed by COVID-19.

10. Even with high vaccine rates in the community, COVID-19 will remain a significant hazard in any workplace in which there is a possibility that people will interact or use the same common spaces (even at separate times). The Mine is clearly such a workplace.

These findings will clearly be helpful to any workplace where the employer wishes to mandate vaccinations in the current climate.

The FWC also made a number of other helpful observations on the law in this area, including confirming that an ability to implement a mandatory vaccination policy (in the absence of a public health order, term in an employment contract, etc dealing with this) is based on the implied duty of employees to follow directions given to them by their employer. However, employees are only bound to follow such directions where they are lawful and reasonable.

The next question was whether the direction was reasonable.

Duty to Consult in WHS Legislation

The FWC found that a relevant factor in considering whether the direction was reasonable, was whether BHP had complied with its duties to consult its workers under Work Health and Safety Act 2011 (NSW) (‘WHS Act’).

The WHS Act is based on federal model work health and safety model laws, which have been enacted in all jurisdictions except Victoria and Western Australia (although WA will be adopting them shortly).

Section 49 deals with consultation and is in the following form:

49 When consultation is required

Consultation under this Division is required in relation to the following health and safety matters:

(a) when identifying hazards and assessing risks to health and safety arising from the work carried out or to be carried out by the business or undertaking,

(b) when making decisions about ways to eliminate or minimize those risks,

(c) when making decisions about the adequacy of facilities for the welfare of workers,

(d) when proposing changes that may affect the health or safety of workers,

(e) when making decisions about the procedures for—

(i) consulting with workers, or

(ii) resolving work health or safety issues at the workplace, or

(iii) monitoring the health of workers, or

(iv) monitoring the conditions at any workplace under the management or control of the person conducting the business or undertaking, or

(v) providing information and training for workers, or

As noted in the explanatory memorandum to the model laws, the obligation to consult requires employers (and other Persons Conducting Businesses of Undertakings (‘PCBUS’)) to “share relevant information about work health or safety matters (listed in clause 49) with their workers; give workers a reasonable opportunity to express their views; and contribute to the decision processes relating to those matters. It also requires PCBUs to take workers’ views into account and advise workers of relevant outcomes in a timely manner.”

There are also separate duties in the legislation to consult any elected health and safety representatives (HSR).

The duties to consult are to do so (only) “in so far as reasonably practicable”. The FWC acknowledged that this meant that in urgent cases a truncated consultation process might be warranted.

The FWC found that the following points can be drawn from previous case law on what constitutes meaningful consultation:

The FWC also considered that the NSW Government Code of Practice Work Health and Safety Consultation, Cooperation, and Coordination was relevant to the question of meaningful consultation. This, it said, established the following points:

The reference to HSRs is to “Health & Safety Representatives”. Generally speaking, workers are entitled to elect HSRs under the WHS Act should they wish (but are not required to do so, so will not be a feature in all workplaces).

Did BHP comply with its duty to consult under WHS legislation?

The FWC found that BHP had commenced an education program and promoted COVID-19 vaccination to all of its employees across its Australian operations, prior to 31 August 2021.

From late August 2021, the senior leadership team of BHP considered whether to make COVID-19 vaccination a condition of entry to its workplaces and undertook a risk assessment.

BHP set up a specific mailbox for receiving feedback from workers in respect of the vaccine process, however, the FWC found that it was clear from the language that BHP used in seeking feedback that there was no real consultation on the decision to mandate vaccines.

In particular, the FWC noted the following announcement from BHP to employees in August 2021, which it said demonstrated that BHP proceeded on the basis that it did not need to consult prior to a decision on vaccinations being made (with the FWC’s emphasis):

‘We understand that this will generate a lot of questions, and potentially some concern, and are committed to ongoing discussion and engagement with you about the details of the finalised policy should a decision be made to introduce such a requirement.’

In other words, the FWC found the statement demonstrated that BHP would only discuss the matter with employees once a decision had been made, rather than as part of the decision-making process.

Similar findings were made regarding communications to the Union at the same time. These included the following wording:

When the announcement regarding mandatory vaccines was delivered by BHP to employees on 7 October 2021 it included the following wording:

‘Based on the findings of our assessment, the Company will introduce a requirement for COVID-19 vaccination as a condition of entry to BHP workplaces in Australia for all workers and visitors.’

The FWC found that:

The FWC also noted as follows (a reference to “Site Access Requirement” are to the requirement to be vaccinated to gain access to the worksite):

[150] Despite BHP’s communications noting that they were committed to ongoing engagement with their workforce, it does not appear that employees were asked to contribute ideas or suggestions in relation to the decision-making process or the risk assessment or rationale that underpinned the decision to introduce the Site Access Requirement. Although substantial information was provided about COVID-19, little if any information was provided to Employees about the risk assessment that was undertaken, such as an evaluation that the existing control mechanisms were of limited effectiveness. We agree with the Respondent that it was not obliged to provide the particular Risk Assessment document requested by the Employees and others. However, we consider that information that explained how the Respondent had taken into account and weighed up matters including those set out in s.18 of the WHS Act, was relevant information.

The reference to the matters listed in section 18 of the WHS Act are to those things that would be considered in a risk assessment including (a) the likelihood of the hazard or the risk concerned occurring; (b) the degree of harm that might result from the hazard or the risk; the ways of eliminating or minimising the risk, etc.

In light of the above, the FWC found that BHP had not properly consulted staff in respect of the vaccination policy which in turn meant it could not be a reasonable direction (and therefore was unlawful).

However (helpfully) the FWC indicated that had there been proper consultation there were a number of other factors that would have provided a strong case that the direction would have been reasonably lawful. The FWC put it this way:

“[252] We note that there is a range of considerations which otherwise weighed in favour of a finding that the Site Access Requirement was reasonable, including that:

[253] Had the Respondent consulted the Employees in accordance with its consultation obligations − such that we could have been satisfied that the decision to introduce the Site Access Requirement was the outcome of a meaningful consultation process – the above considerations would have provided a strong case in favour of a conclusion that the Site Access Requirement was a reasonable direction.”

The FWC also made comments that it considered that BHP should now still have sufficient time to (properly) consult employees before 15 December 2021 (the date it had wished to require employees to be fully vaccinated). In doing so it leaves the door open to BHP to implement a vaccine mandate as it originally wished to.

Interestingly, the FWC found that BHP had complied with consultation obligations under the enterprise agreement that applied to the employees in the mine.

As with all enterprise agreements, the BHP Enterprise Agreement was required to contain a consultation obligation which largely mirrored the model consultation obligation that appears in modern awards, namely to consult employees once it has made a ‘definite decision’ to introduce a ‘major change’ to ‘production, program, organisation, structure or technology in relation to its enterprise that is likely to have a significant effect on the employees.’

The decision supports the view that it is possible to lawfully introduce a mandatory COVID-19 vaccination policy on health and safety grounds. However, a failure to consult employees (and any appointed Health & Safety Representatives) in respect of the decision to mandate vaccines is likely to be fatal to introducing such a policy lawfully.

It is therefore vital that employers properly consult employees by: